Project Prevention is already operating in parts of Kenya, where it is paying women living with HIV U$40 to accept long-term contraception. A doctor is paid U$7 per patient.

In Kenya, Project Prevention is working in Nyanza province where they place woman in groups of between 10 and 15 and give them a pooled amount of money to begin income-generating activities in return for accepting intrauterine devices (IUDs) as long-term contraception. Each woman then receives around R280 in return.

It might, of course, be of concern to women being targeted for life-long chemical birth control (ie, sterilization by pill), or irreversible surgical laparoscopy, to understand the rationale for WHY they are being so targeted. If “HIV positive” is the reason, then we must ask ourselves what “HIV positive means.”

From the manufacturer’s disclaimer’s on the major tests, and the major medical literature:

“At present there is no recognized standard for establishing the presence or absence of antibodies to HIV-1 and HIV-2 in human blood.” – Abbott Labs HIV test – the industry ‘standard.’

“No standard,” means no way to determine a positive, or a negative, or one from the other.

How does this play out in real life? Everybody and anybody, and anything, can test “positive”:

“False-positive ELISA test results can be caused by alloantibodies resulting from transfusions, transplantation, or pregnancy, autoimmune disorders, malignancies, alcoholic liver disease, or for reasons that are unclear.” – Archives of Family Medicine, 2000

“For reasons that are unclear!” Well, sign me up. Sounds ‘scientific,’ doesn’t it?

“[I]t is very important to remind patients and clinicians that influenza vaccination may cause cross-reactivity with HIV antibody assays. The time course for such cross-reactivity remains uncertain.” – NEJM, 2008

That is, flu and other vaccination is a cause of “HIV positive” results. Do you think these tests ought to be used to sterilize African women?

“Alloimmune mice (mice that have been exposed to cells from another murine [mouse] strain) were shown to make antibodies against gp 120 and p24 of human immunodeficiency virus (HIV), and mice of the autoimmune strains MRL-_tpr/lpr_ and MRL-+/+ made antibodies against gp120. This is surprising because the mice were not exposed to HIV.” – Science, 1991

Which means? That mice, for no reason, have proteins that make the ‘HIV test’ come up positive…

Do you want to take this test?

What does it mean? In English – cow and goat proteins that were part of the test itself – made the test ‘test positive!’

But among the poor, this just doesn’t seem to matter. Positive or negative, they’re all positive when they’re black enough:

“[The test’s] error rate won’t matter much in areas with a high prevalence of HIV, because in all probability the people testing false-positive will have the disease. But if the same test was performed on 1,000 white, affluent suburban housewives – a low-prevalence population – in all likelihood all positive results will be false, and positive predictive values plummet to zero.” – AIDS Alert, 1998

And so, let’s sterilize women, just like ‘we’ (the Western powers) have all over the world, for decades…for the better part of a century. From Cold Spring Harbor, to Carrie Buck, to Margaret Sanger, to Himmler and Goebbels…to the UN Population Fund, to the Philippines, to India…. 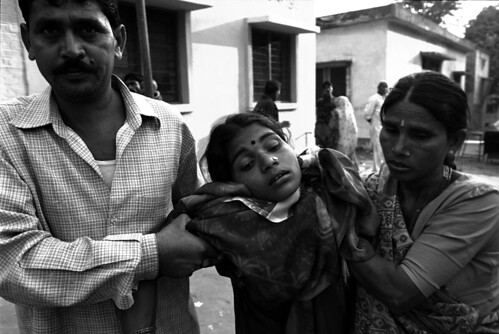 After the laparoscopy (sterilization) operation this young woman is helped outside. Photo by Nick Rain.

Western ‘scientists’ and do-gooders nary meet a poor women they don’t want to prevent from giving birth.

A big ‘thank you,’ by the way, can be made to Barbara Harris, founder of ‘Project Prevention,‘ who loves to be very concerned about the sex lives of others. As she’s stated, in reference to drug addicts:

“We don’t allow dogs to breed. We spay them. We neuter them. We try to keep them from having unwanted puppies, and yet then women are literally having litters of children.”

Thanks Barbara, for sharing your insights. History has a word for people like you, of course…

And that word is:

Eugenicist. Or, Nazi. Depending on your mood.

Read all about HIV testing at RTB’s “Test” section, and at ARAS.ca.ab/test.

Thanks to Terry Michael for forwarding the SFAIDS article.