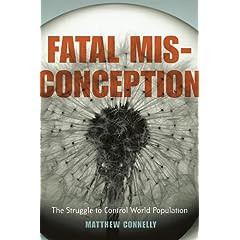 From Publishers Weekly
Starred Review. Passionate and troubling, this study by Columbia University historian Connelly (A Diplomatic Revolution) tells the story of the 20th-century international movement to control population, which he sees as an oppressive movement that failed to deliver the promised economic and environmental results.

According to Connelly, some proponents of the movement thought it was the key to women’s health and well-being; others saw it as a way to eliminate the poor population; still others believed it would protect the environment. But Connelly also shows how larger economic and social contexts shaped the movement. For example, during the 1930s international Depression, ordinary people increasingly felt that couples planning families should focus on financial considerations; at the same time, as the state offered increased economic aid, it became acceptable to believe the state should also have a role in regulating reproduction.

Far from disinterested, Connelly challenges many of the population control movement’s claims: to those who argue that the slowed population growth in Asia has helped save the planet, Connelly notes tartly that if Asians have 2.1 children, but also air conditioning and automobiles, they will have a much greater impact on the global ecosystem than a billion more subsistence farmers. Ambitious, exhaustively researched and clearly written, this is a highly important book. 22 b&w illus. (Mar.)
Copyright © Reed Business Information, a division of Reed Elsevier Inc. All rights reserved.

Review
This is history written from the heart. The story it tells is of misplaced benevolence at best and biological totalitarianism at worst. Deeply researched and elegantly written, it is a disturbing, angry, combative, and important book, one which raises issues we ignore at our peril.
–Jay Winter, Yale University (20080325)

Matthew Connelly bravely and eloquently explores the dark underside of world population policies. It is a clarion call to respect individuals’ freedom to make their own reproductive choices.
–William Easterly, author of The White Man’s Burden: Why the West’s Efforts to Aid the Rest Have Done So Much Ill and So Little Good (20080505)

One of the most gifted historians of his generation has given us an exciting and thought-provoking new way to understand the making of the ever-globalizing world of today.
–Akira Iriye, author of Global Community: The Role of International Organizations in the Making of the Contemporary World (20080515)

Connelly raises the most profound political, social, and moral questions. His history reveals that the difference between population control and birth control is indeed that between coercion and choice.
–Mahmood Mamdani, author of Good Muslim, Bad Muslim: America, the Cold War, and the Roots of Terror (20080520)

This is a superb global history. By focusing on NGOs and transnational networks, the United Nations and nation states, Connelly has given us an important new way of seeing world politics.
–Emily Rosenberg, University of California, Irvine (20080518)

Passionate and troubling…Connelly tells the story of the 20th-century international movement to control population, which he sees as an oppressive movement that failed to deliver the promised economic and environmental results…Ambitious, exhaustively researched and clearly written, this is a highly important book. (Publishers Weekly (starred review) 20080529)

[A] disturbing and compelling global history of population control programs…Drawing from records in more than 50 archives in seven countries, including those from Planned Parenthood and the more recently opened Vatican Secret Archives, Connelly provides extensive examples of movements to adjust populations…The world population growth is slowing and the age of population control appears to be over for the moment, but Connelly writes that his book is not just about history: It is a cautionary tale about the future.
–Lori Valigra (Christian Science Monitor 20080524)

Highlight[s] the importance of knowing who speaks for whom…Fatal Misconception describes a historic clash of opposed interest groups wrestling to impose their own population policies on the developing world.
–Michael Sargent (Nature 20081017)

The shocking theme of Connelly’s book is how Western governments–and most especially successive U.S. administrations–supported a policy which would have appalled them if it had been imposed on their own families.
–Dominic Lawson (The Independent )

A devastating account of the population-control movement; he demonstrates, detail by shocking detail, how a movement that believed it was acting from the highest humanitarian ideals became responsible for callous abuses of human rights on a global scale, ruining millions of lives in a grotesque eugenic experiment.
–Dominic Lawson (Sunday Times )

Mr. Connelly’s story is a global one, partly because so many of the groups seeking to influence the reproduction of others were transnational, but also because often it was those in one country who wished those in another to have fewer children…Mr. Connelly’s most devastating critique of population control is not that it destroyed lives, or was based on imperialist or eugenic ideas, but that it did not work. (The Economist )

Though painful to read, [Fatal Misconceptions] contain[s] many valuable lessons for anyone who cares about making development programs work, both technically and politically.
–Helen Epstein (New York Review of Books )

This book provides the best historical record yet of how our culture was shaped by the acceptance of birth control.
–Patrick Carroll (Catholic Herald )

Fatal Misconception is the disturbing story of our quest to remake humanity by policing national borders and breeding better people. As the population of the world doubled once, and then again, well-meaning people concluded that only population control could preserve the “quality of life.” This movement eventually spanned the globe and carried out a series of astonishing experiments, from banning Asian immigration to paying poor people to be sterilized.

Supported by affluent countries, foundations, and non-governmental organizations, the population control movement experimented with ways to limit population growth. But it had to contend with the Catholic Church’s ban on contraception and nationalist leaders who warned of “race suicide.” The ensuing struggle caused untold suffering for those caught in the middle–particularly women and children. It culminated in the horrors of sterilization camps in India and the one-child policy in China.

Matthew Connelly offers the first global history of a movement that changed how people regard their children and ultimately the face of humankind. It was the most ambitious social engineering project of the twentieth century, one that continues to alarm the global community. Though promoted as a way to lift people out of poverty–perhaps even to save the earth–family planning became a means to plan other people‘s families.

With its transnational scope and exhaustive research into such archives as Planned Parenthood and the newly opened Vatican Secret Archives, Connelly’s withering critique uncovers the cost inflicted by a humanitarian movement gone terribly awry and urges renewed commitment to the reproductive rights of all people.

About the Author
Matthew Connelly is Associate Professor of History at Columbia University.